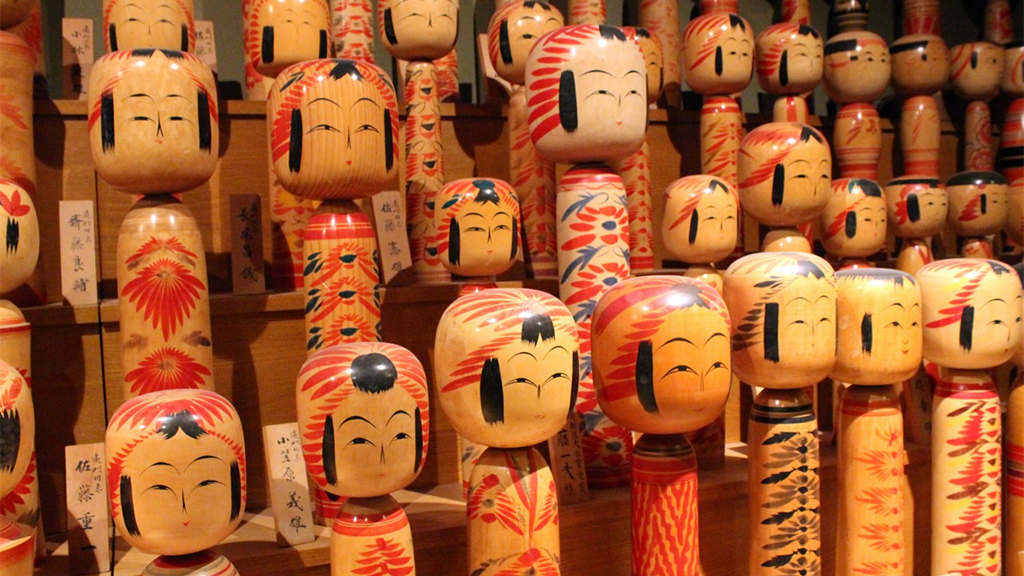 Little is known of the early history of Kokeshi Japanese Wooden Dolls. One school of thought believes that Kokeshi dolls have their origins in the practice of spiritualist religion. Wooden dolls were thought to contain the spiritual essence of the dead and were often made for honorary remembrance.

The modern history of Japanese Kokeshi dolls began in the latter part of the Edo Era (1603-1867). Originating in the Tohiku region of northern Japan, famous for it’s hot springs and rejuvenating spa waters, Kokeshi Dolls acted as an important source of extra income for local artisans known as Kijiya (which means woodworker in Japanese), who specialised in wood work and the production of household utensils such as trays and wooden bowls. In severe winters these Kijiya craftsmen began making “Kokeshi Dolls” to sell as souvenirs to visitors who frequented the local hot springs. The dolls acted not only as souvenirs but also as massage tools used by the bathers to tap their shoulders whilst enjoying the warming benefits of the hot springs.

The Kokeshi dolls were very simple in design, originally made on hand-powered lathes. Traditional Kokeshi dolls had common characteristics that consisted of a basic cylindrical limbless body and a round head. Though the first dolls might have been unpainted, today most Kokeshi are painted in bright floral designs, kimonos, and other traditional patterns. Colors used were red, yellow and purple. As all the dolls are hand painted, no two faces are alike. This is perhaps the greatest charm of the Kokeshi. Some dolls are whimsical, happy and smiling, while others are serious. 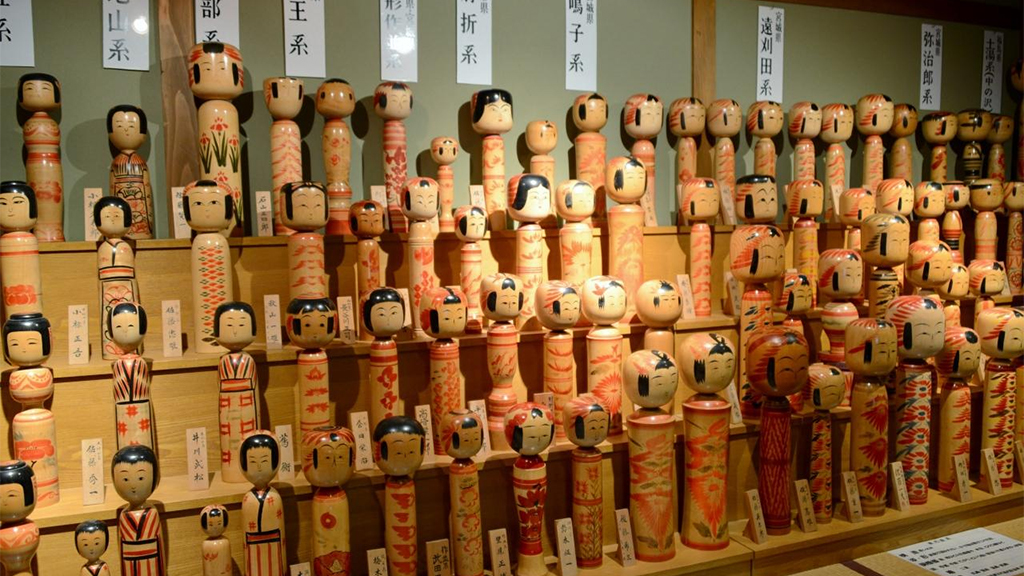 Soon their popularity spread throughout Japan and they became favoured as wooden toys for those unable to afford porcelain dolls. In addition the simple rounded shapes of the dolls lent themselves as early teething rings for young babies.

Kokeshi dolls traditionally represented young girls and they quickly became popular for their depiction of feminine beauty. In addition their simple charm and association with childhood meant that they were often given as gifts when a child was born, as birthday presents or as symbols of remembrance when a child died. In addition Kokeshi Japanese Wooden Dolls were popular with the children of farmers as it was widely thought that they would promise a good harvest, as it was believed that it would create a positive impression on the gods if children played with the dolls.

The woods used for Kokeshi vary. Cherry is distinguished by its darkness. Mizuko or dogwood is softer and used extensively. Itaya-kaede, a Japanese maple is also used. The wood is left outdoors to season for one to five years before it can be used to make a doll. Today, Kokeshi is recognized as one of the traditional folk arts of Japan.

Traditional Kokeshi are for the main part still only produced in the six prefectures of the Tohoku region. The twelve schools of design here all exhibit distinctive features that allow experts to tell exactly where they have been produced and often by whom.

Creative Kokeshi do not follow the traditional designs originating from the Tohoku region and instead have an unstructured inspiration which is completely free in terms of shape and painting, the only traditional constraint being their manufacture by means of the lathe. Unlike traditional kokeshi, they do not display any of their distinctive local colour nor the techniques that had been passed down through the generations. They simply represent the creative thought and ability of the craftsman.

Traditional and Creative crafted dolls have become a cause for celebration in Tohoku and across Japan. Every year, in early September, people gather in Naruko Onsen where craftsmen from across the nation gather to honor Kokeshi in a competition where the number one prize is an award from the Prime Minister.

There are many different styles of Kokeshi, but there is one philosophy that all Kokeshi dolls share, and that is the pursuit of beauty and artistry through simplicity. This philosophy is extolled at the website: http://www.dollsofjapan.co.uk

Ivor Conway has traveled extensively throughout Japan and was charmed by the Japanese art form of Kokeshi. The website, [http://www.dollsofjapan.co.uk], is a global resource intended to further knowledge of these simple but elegant works of art.

Related Interesting Posts:
Spring Cleaning in the States vs End of Year Cleaning in Japan
Eastern Influences On Western Interiors: Japanese Decor – Part I of II – Color, Texture and Contrast
A Brief History of Japanese Daruma Dolls
A Look at Japanese Platform Beds
Japanese Beetles – The Plain Truth About Traps… And A Tiny New Winged Hope!

1 thought on “History of Kokeshi Wooden Dolls from Japan”